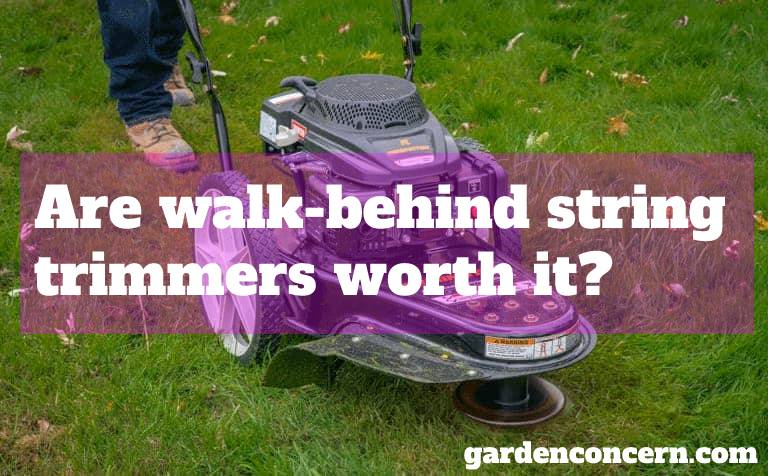 Is your lawn stuffed with thick weeds and too much-outgrown vegetation? If so, trimming the unnecessary weeds and plants using a handheld string trimmer will surely be back-breaking. So, what is the perfect tool to deal with this problem? A lawnmower? Well, lawnmowers cannot chop the rugged and extremely thick weed twigs so that would not be sufficient.

With such a remarkable build and more-than-average cutting swath, you can clean an extra-large area without causing sprains, muscle fatigue, and backaches. Don’t worry about the efficiency since even the thickest weed can be trimmed down in a single pass with this monster tool. If you are still confused about Are walk-behind string trimmers worth it? Read the article further so you can make the right decision regarding whether you should have it in your garage or not!

Reasons why you should get walk-behind string trimmers?

As mentioned before, the wheels of walk-behind string trimmers are kept large and wide so the unit can run even on the rough and bumpy terrain smoothly. The average wheel diameter you get in wheeled string trimmers is 12-18 inches which ensure the easiest manoeuvrability.

The manufacturer is aware of the fact that the user will use the tool across a path full of spikey twigs, overgrown vegetation, and maybe a littered space. Thus, to prevent wheels from getting punctured, they are made up of high-end plastic or commercial grade rubber materials. These plastic and composite wheels are not vacuumed or hollow so there’s no chance of them getting flat while rolling through thorny surfaces.

The cutting swath of a walk behind string trimmer can never be compared to that of hand-held string trimmers at any cost. The handheld tools come with a maximum of 12″ cutting width while that of wheeled string trimmer ranges from 17″-22″.

Not only this, but the wheeled layout makes it easier for you to reach the far ends of your garden while standing at a point. It’s not only the string head that’s wide but also the strings themselves are large enough to tackle overgrown vegetation in a go. In other words, you just have to swipe the trimmer over a point and that area would get totally clean in no time and you won’t see even a single weed straw there.

Don’t think that your tool will get useless once its strings are damaged or torn down. The manufacturer knows that you are going to use this tool to cut down tougher and thicker weeds and bushes so it’s normal for the string lines to get torn.

To deal with this issue, the manufacturer has added the feature of replacing string lines of the wheeled string trimmer – just as you do with handheld tools. Not only does it allow you to replace the damaged or torn string lines but also let you change the string line as per the nature of the trimming job you are up to.

Some high-end models of walk-behind string trimmers come with a microfilament string line that is not only sharper than others but also rotates at the maximum velocity due to being lightweight. When this microfilament rotates at such an exceptional speed, it chops off the weeds and vegetation in a second.

However, this microfilament line comes with a small lifespan due to being thin. Whenever you hit the stones or pavement, the line breaks and you need to replace it with a new string line to resume. Thankfully, the deck of most of the wheeled string trimmers are mounted higher than that of a lawnmower or edger, to prevent the string line from hitting the rocks.

Features of walk-behind string trimmers that are worth buying

From quality, we don’t only refer to the construction quality of a walk-behind string trimmer but also the quality of its performance. To ensure the finest quality, get the tool having a sturdy build, composed of high-end materials.

Also, check how efficient the tool is and how much thick vegetation it can chop down, without getting stuck during operation. Inspect all the ins and outs of the offer thoroughly so you don’t have to regret your decision later.

Most of the walk-behind string trimmers are gas-powered and like most of the gas-powered tools, they often come with a pull-cord start system. To ignite the engine, you have to pull the recoil which demands much effort and force – sometimes, it’s tight enough so not a female hand can start it.

Luckily, some companies have started to manufacture wheeled string trimmers with push-button ignition systems. To start them, you just have to push the button or turn the trigger and the engine begins to roar. Thus, if you can make enough space in your budget, you better go with such easy-to-start string trimmers.

Likewise, look for the other features like adjustable deck height, easy-to-replace string line, and variable speed and cutting swath.

In gas-powered wheeled string trimmers, you encounter two types of tools; a 2cc engine and a 4cc one. The 2cc engine is however more powerful and can turn the highly thick and dense patch of land barren in an instant. The only problem with this engine type is that it’s extremely noisy and generates fumes.

On the other hand, the 4cc engine is not as powerful as a 2cc one but still, it can cut through twigs, roots, and immature plants. The primary benefits this sort of engine offers are their eco-friendly nature as they don’t generate loud noise or give off thick smoke.

All in all, while choosing a wheeled string trimmer, you should keep performance and power as your priorities. However, if you have a small to medium size lawn where there are no severe vegetation, you set the budget as your priority.

But still, make sure that this Budget-friendly tool can cope with grass, plants, and weeds effectively. And at the same time, it should be durable enough so you won’t have to buy another walk-behind string trimmer before the decade.

How much area can you cover using walk-behind string trimmers?

A walk-behind trimmer can cover a huge area in a single pass. Generally, you can clean an area of about 0.25 acres with a filled fuel tank of an average-sized wheeled string trimmer. In simple words, even if your lawn is stuffed with unpleasant and nauseating vegetation, a one-day trimming job will be enough to turn the same land into an eye-pleasing one.

Are walk-behind string trimmers better than handheld ones?

The answer to this question depends upon various factors like the area you are up to cleaning, storage space you have in your garage, budget and other preferences like convenience, power, and manoeuvrability.

For example, to use a wheeled string trimmer, you have to use your muscle power to push it forward in your lawn and reaching the narrower and tighter corners with this huge tool is also not possible. The good thing here is that these wheeled string trimmers possess a huge cutting swath so you can clean a super-wide area in less time. Despite being better in performance, these walk-behind string trimmers are not only cheaper but can also tackle difficult vegetation.

On the other hand, handheld trimmers offer more manoeuvrability and allow you to reach tighter corners. Also, these handheld devices are easier to use due to being lightweight and compact so you can pick them up and navigate towards tricky edges and higher shrubs. However, you should not expect them to chop thick vegetation or clean wide areas, effortlessly.

In a nutshell, if it’s the comfortable operation that you desire most, you may go with the hand-held string trimmers since they are lighter, quieter, and easy to use. And if power and efficiency are the things you prefer, you should only consider the walk-behind string trimmers.

This is Review Base blog.